The <a href=http://globalgamejam.org>Global Game Jam</a> is an event where all around the world people get together in different locations and split into teams in order to make games in 48 hours following a theme set by the organizers.

This year, the theme was this picture: 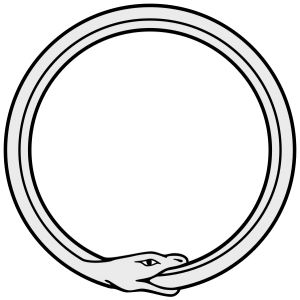 Our team was composed game by José Pedro Gioscia (The Artist), Washington Miranda (Programmer) and us (both Programmers). Hernán Gonzales Martinez from Tono Sound Production provided the music and sound effects for our game, he did the same thing for most of the other teams on our location.

The game was named Medusa - “La viborita multiloca”, you play the game as a serpent on space and you move horizontally around a cave eating or being hit by other monsters. Whenever the monsters or the obstacles hit your body it breaks from that point. If the remaining part of your body is too short, you are weakened and can’t eat monsters anymore. You die if you hit an obstacle or hit a monster while you are weakened.

The interesting part of the game is that after death comes rebirth. When you die, you revive at the start of the level with an echo of your past lives. They will help you in your journey eating the monsters in their path but they will leave parts of their bodies as new obstacles when they are injured.

Right now the game has no defined objective, it is more an experimental test of the mechanics and when you play you make your own objectives enjoying going through the random level and interacting with your past lives on the world.

Play the game online, or download a runnable jar to play it. Control the snake with the arrow keys.

Conclusions about the Global Game Jam

Advice for other jams