This post is an introduction and analysis of different type of game controls I am working in order to improve the game playability.

To control the bow I need to know basically the next stuff:

Each proposed bow control provides this stuff in its own way (using one or multiple touch, using the keyboard, etc). I will explain how each one achieve that, and comment some pros and cons I think they have as controllers. 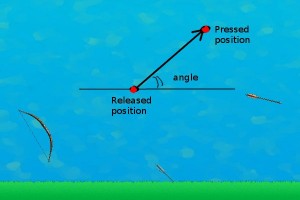 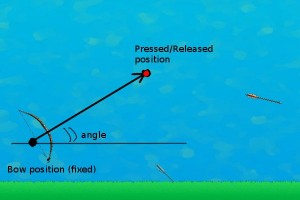 The player presses some point in the screen, drags the pointer to the position he wants and then releases it to fire the arrow. Optionally, the arrow could be fired in the moment the screen is pressed instead when it is released. The angle is calculated by the difference vector between the pointer position and the bow position, and the power by its length. 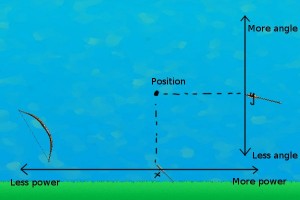 It is similar to the the first type but both positions are specified by two different pointers of a multi touch device.